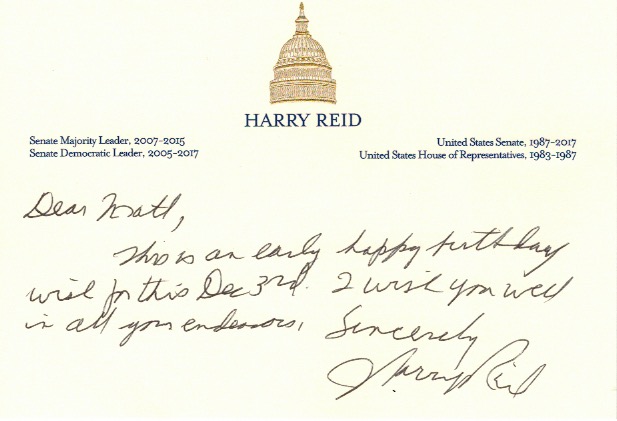 My name is Matt Winick from Ann Arbor, Michigan and I have a strong interest in learning history including social justice.  In these subjects, I like to learn the need for civil rights to be stronger to reduce discrimination, protect the environment from pollution, and many others. U.S. Senator Reid, the main reason that I’m writing you a letter is to explain how I find your work when you served as Chair of the Nevada Gaming Commission and as U.S. Senator from Nevada to be very inspiring to me and to wish you a Happy Birthday for December 2nd.

When you served as Chair of the Nevada Gaming Commission from 1977-1981, I liked on how you worked on pushing for ethics reform to ban gifts to members of the Nevada Gaming Commissions from lobbyist including mafia gangs to reduce corruption.  When you served as U.S. Senator from Nevada from 1987-2017, I truly appreciated on how you were a strong supporter of civil rights by advocating for people with disabilities’ rights and supporting funds for women including minorities businesses to help them compete in the economy.  To help improve people with disabilities’ rights, I like on how you worked with Democratic Senator Ted Kennedy, Republican Senator Bob Dole, Republican Senator Nancy Kassebaum Baker, Republican Senator Richard Lugar, Democratic Senator John Kerry, and other moderate republicans to help President George H.W. Bush push for the American With Disabilities’ Act of 1990 to help protect people with disabilities’ from being discriminated in education including public places.  Also on civil rights, I liked on how you voted in favor of Lily Ledbetter Fair Pay Act to help allow filing for equal pay discrimination lawsuit when being discriminated in pay based on gender and supported Matthew Shepard and James Byrd Hate Crime Prevention Act to expand on protection for minorities, gender, people with disabilities, and people with sexual orientation from a hate crime.  Voting in favor of the Clean Air Act of 1990 to help reduce air pollution by requiring industries to burn clean fuel along with promote research in biofuel for vehicles, supporting funds for renewable energy resources to help reduce addiction to oil with gas, and pushing for funds to help protect public lands, water resources including national parks from being polluted is common sense to help protect the environment.  To improve the economy, I liked on how you worked with some moderate Republicans to pass The American Recovery Act of 2009, a stimulus package to create job-training programs along with invest in helping small businesses and work with Democratic Barbara Boxer from California including Republican Senator John Ensign from Nevada to create Invest in the USA Act to encourage American companies to bring overseas profits back to the U.S. in order to create jobs.   On health care reform, I liked on how you supported legislation to expand funds for stem cell research to help find cures or medicine to help combat against Parkinson disease including other diseases and had the courage to push for The Affordable Care Act to help protect people with pre-existing conditions from being denied insurance including allow people under 26 to stay on their parent’s health insurance.  Another thing that I liked about your work in the U.S. Senate was how you were an advocate of campaign finance reform to help reduce dark money into elections or campaigns from lobbying groups to reduce corruption.

U.S. Senator Reid, I have autism with a learning disability. Having a disability is hard for me because I have trouble comprehending on learning different subjects, sometimes I struggle to communicate my thoughts, and get teased. Another thing that I struggle is when people get judgmental about me being different based on a disability.  Your commitment to be a strong supporter of Civil Rights and your support for people with disabilities’ rights really inspires me to work hard on my disability. The ADA of 1990 that you supported helped benefit me to get an education from elementary school through my community college and it helped protected me from being discriminated based on a disability. In education, the ADA of 1990 helped give me accommodations like extra-time on exams, have a T.A. or a tutor help me work on different assignments, use educational software resources including a recorder to help assist me on comprehension along with improve on note-taking, and have special education services help set up accommodations.  It also helped me get an Associates Degree in Liberal Arts in May 2014 from Washtenaw Community College in Ann Arbor, Michigan. My main focus in Liberal Arts is history, government, some science, criminal justice, and some businesses.  The American Recovery Act of 2009 helped me get into a job-training program called the B. Side of Arts at EMU college of Business in Michigan. At the job training program they had lecture explaining how businesses works including classes to help me along with other people to develop job-skills and even got paid. As a result, the American Recovery Act helped me develop job-skills to help me prepare for the workforce. Your role as former Chair of the Nevada Gaming Commission and as former U.S. Senator from Nevada gives me motivation to continue to learn history including social justice. My future goal is to someday work in these areas to help need for civil rights to be stronger to reduce discrimination, protect the environment from pollution, and many others.  My letter is a gift to you for inspiring me and to wish you a Happy Birthday for December 2nd. My birthday is December 3rd.

I strongly believed that you made a great difference when you served in public service. I’m very proud on how you worked hard to support civil rights, protect the environment, improve the economy, and many others. The ADA of 1990 and the American Recovery Act helped benefit me.  You have inspired me to work hard on my disability, learn about your work, and to be interested in learning history. Thanks for taking the time to read my letter, making a great impact on society, and inspiring me. I wish you well for the future and to continue to advocate for common sense ideas to help our country when it faces tough times. 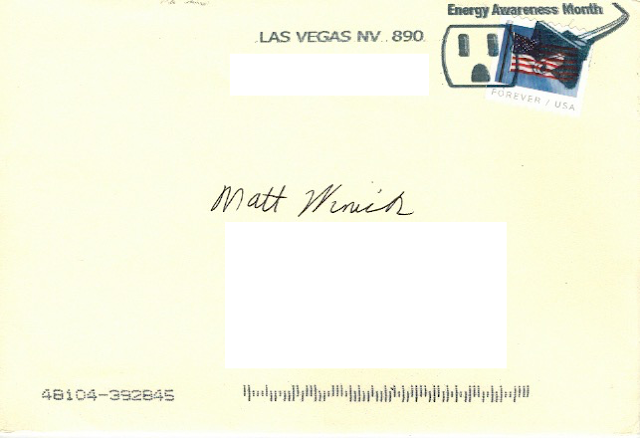 Posted by Matt Michigander at 10:09 AM