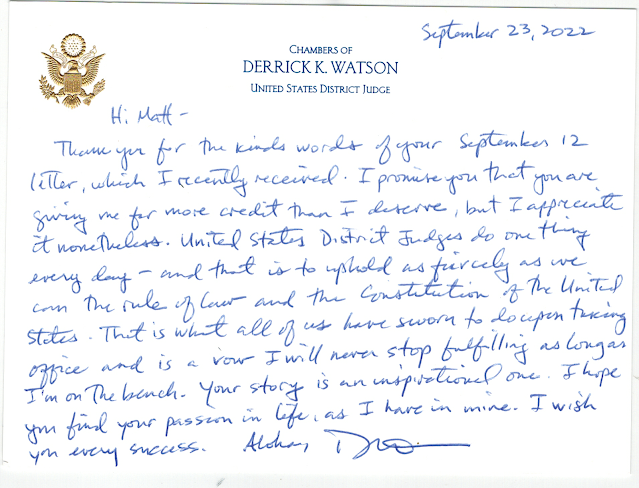 c/o U.S. District Court for the District of Hawaii

My name is Matt Winick, an Asian American from Ann Arbor, Michigan with a strong interest in learning history with social justice.  In these subjects, I like to learn the need to make Civil Rights stronger to reduce discrimination, improve social justice, and many others. U.S. District Judge Watson, the main reason I’m writing you a letter is to explain how I find your work as current U.S. District Judge for the United States District Court for the District of Hawaii to be very inspiring to me.

In November 2012, I liked on how you accepted President Obama to serve as United States District Judge for the United States District Court for the District of Hawaii to help President Obama work hard to make a great difference for our country. In your current role as U.S. District Judge, I like on how you are a strong supporter of Civil Rights by advocating for people with disabilities’ rights, pushing for strict sentencing for people who commit hate crimes to help protect people who are different, and express the need for better protection for minorities including women from being discriminated.  Supporting drug treatment programs to help drug users get the care they need to reduce drug abuse, working to expand the court system to help victims of crime or victims of domestic violence get help on dealing with their trauma, and expressing along with supporting the need for funds to improve DNA testing including forensic science to help solve evidence including cases efficiently while reduce sending an innocent person to jail is common sense for criminal justice reform.  In March 2017, I was very proud on how you had the courage to grant a temporary restraining order blocking President Trump’s Executive Order 13780 that places a limits on travel to the U.S. to refugees that don’t possess either a visa or a travel document from certain countries due to believing that it violated the First Amendment’s Establishment Clause of the United States Constitution and how it is use to be against freedom of religion or have a purpose to disfavor a particular religion. Another thing that I like about your work in the U.S. District Court for the District of Hawaii is how you are a strong supporter of protecting civil liberties like protecting the 4th amendment to help protect people from unreasonable searches and strongly advocate for ethics reform to help reduce corruption including judicial misconduct in the court system. I really like on how you are active in the Asian American community by supporting Asian American with disabilities’ rights, express the need for Asian Americans including Asians to go into public services to help their communities,  support the idea of the need for diversity programs to help spread awareness about Asian American including Asian culture, and many others.

U.S. District Judge Watson, I have autism with a learning disability. Having a disability is hard for me because I have trouble comprehending on learning different subjects, sometimes I struggle to communicate my thoughts, and get teased.  Your commitment to be a strong supporter of Civil Rights and your support for people with disabilities rights really inspires me to work hard on my disability.  Being an Asian American with a disability is difficult for me because some Asians, some Asian Americans, their parents, and some of their social groups tease me or get judgmental about me having a disability and how they believe that I’m not meeting their standards.  However, your role as an Asian American in the judicial system, your advocacy for Asian Americans with disabilities’ rights, and your continuous support for the Asian American communities really motivates me to continue to be proud to be an Asian American with a disability when I face struggles and to have motivation to develop an interest in learning Asian including Asian American culture with history.   On NY Times I enjoyed reading an article called “From a Placid Judge, a Cutting Rejection of Trump’s Travel Ban” because I really liked on how you explain your reasoning for making a decision on the travel ban and had fun learning about your life before you became a U.S. District Judge.  Your role as U.S. District Judge for the United States District Court for the District of Hawaii drives me to continue my interest in learning history and social justice. My future goal is to someday work in these areas to work on creating common sense ideas like make Civil Rights stronger, find ways to improve social justice, and many others.  Also my letter is a gift to you for inspiring me.

I strongly believe that you are making a great difference for America and the judicial system. I’m very proud on how you have the courage to be a strong supporter of Civil rights, express the need for criminal justice reform, and stand up for American civil liberties.   You have inspired me to work hard on my disability,  continue to be confident about being an Asian American when I face some struggles with a disability, and to have an interest in learning different subjects.  I was wondering if you could please explain you role as U.S. District Judge. Thanks for taking the time to read my letter, working hard in the judicial system, and inspiring me. 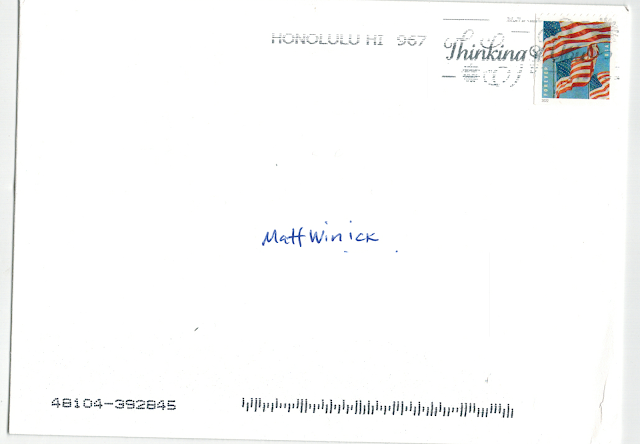 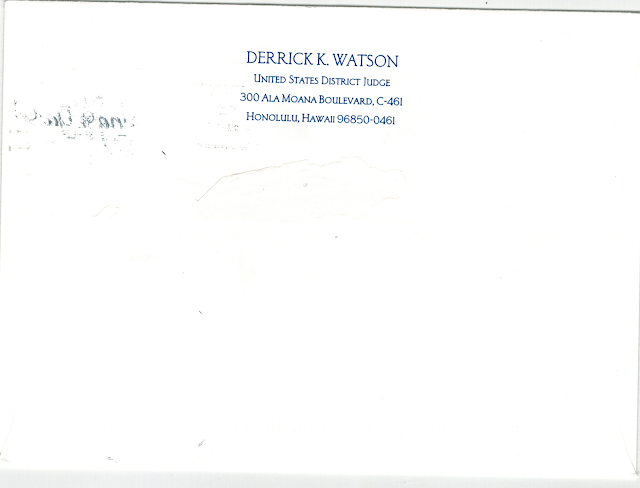 Posted by Matt Michigander at 12:00 AM